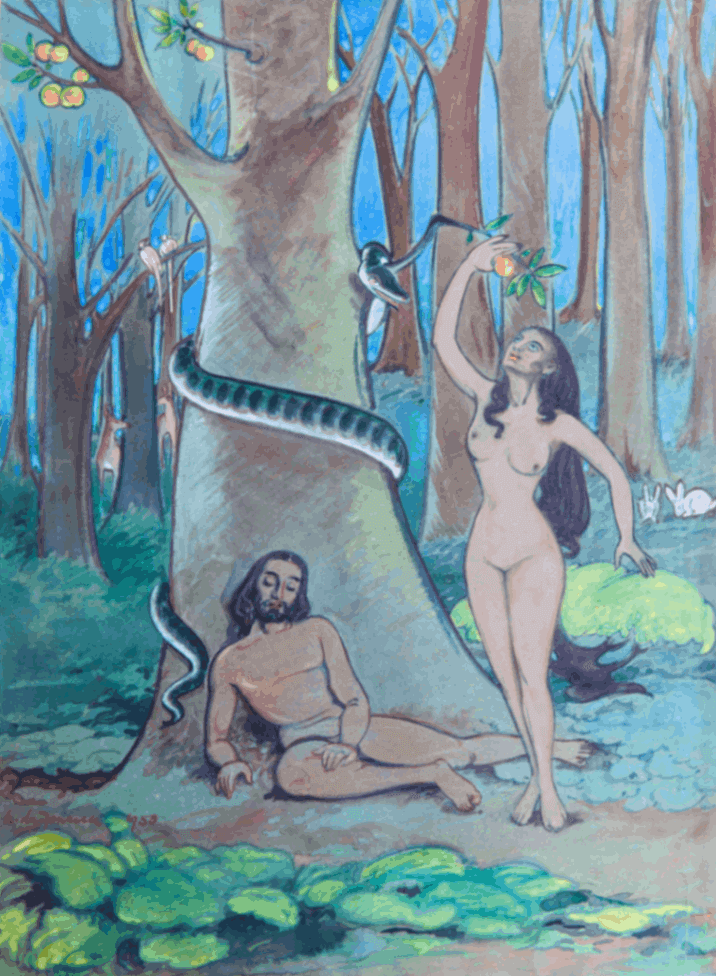 Fonseca, the underappreciated and forgotten master, not unlike the courageous biblical prophets he painted, “had been run down from his native Goa for mixing up traditional biblical scenes with Hindu, Buddhist and Jain elements,” in an attempt to promote social interaction and integration. Fonseca has not yet captured the eye and judgement of the larger art world who have the capacity to confer on his paintings the certification of good art. Will a full recognition continue to elude this deserving and talented Goan artist? It is a tragedy that Fonseca is barely known. Though his work was exhibited during his lifetime and thereafter, both in India, Goa and abroad, he continues to remain in obscurity.

Even during his lifetime, only a handful of art critics have celebrated Fonseca for his original talent and work. They interpreted him without paying attention to his social and political environment and message. They highlighted all the right formal aspects of his art but omitted to link his art to his political and social experiences. Unfortunately, there is no permanent gallery that befits Fonseca or displays his work. Literature on his work is not easily available. Without a gallery or corroborating literature, it may not be possible to convincingly convey the significance of his quest and its relevance and importance for us. A dedicated Fonseca gallery as a cross-cultural space is absolutely essential to rescue his genius and re-present it to the world.

The book will examine and suggest the current significance of Fonseca’s works. It is also a story of Goa and its uneasy relationship with its talented and famous artists. Even as change ripples in the world of visual arts in India, peerless Goan artists who vigorously feed modern Indian art like ‘an invisible river’, continue to find virtually no recognition and space in the postcolonial scenario. The blame should perhaps fall on apathetic Goans who disregard their artists and toss inspiring chapters of their history and heritage to the winds. How on earth could people with so much talent and artistic heritage let go of some of their magnificent history and invaluable art? It’s a paradox that needs to be addressed and set right! It is never too late to recover the neglected, forgotten pages of our creative history. Accord our creative artists and thinkers, the space and recognition that is their due, and in the process rediscover and retrieve lost fragments of our heritage for the greater good of the community.

Until the 1970s, Fonseca’s art benefitted from a few sporadic, genial presentations in the Catholic Church. The clergy salvaged Fonseca, but only very selectively and reluctantly, to demonstrate the Church’s narrative of cultural adaptation. Today the Church does not seem to find Fonseca as interesting and deserving of attention. To be fair, the present attitude of indifference is not exclusive to Indian Christian art, but extends to all Christian art in general. Exhibited or not, the Fonsecas continue to offer insights into our history and ourselves as never before. He is a bridge between the past and present, his oeuvres are immersed in their historical time and space as well as in ours. To understand Fonseca’s work and context, is to gain an insight into our past and present, disconcerting as it may be. This after all is the function of art in society — to reveal that behind apparent order there is chaos. And behind knowledge, sometimes pretension!

To understand Fonseca, one has to factor in the historical times he lived in, infer and establish the influences on his persona and work: the political and artistic movements in the country at the time, the artistic practice in the Catholic Church, the contextual and cosmopolitan modernisms in India and the artist’s personal beliefs and ideology. Only then can one examine and comprehend the context and background of his life’s work. “He would seem then, at least on paper, to have excellent credentials for standing among the best-known Indian artists of the past hundred years.”

Presently, the custodian of Fonseca’s artistic legacy is the Xavier Centre of Historical Research (XCHR), in Goa, an institution run by the Jesuit religious order or the Society of Jesus. In 2006, the artist’s widow, Mrs Ivy da Fonseca, entrusted the entire artistic patrimony to the Jesuits, under a legal agreement to set up a permanent gallery for Fonseca. XCHR aims to reinstate Fonseca’s vision and bring him into more focused public attention. Efforts are on to create an appropriate display assemblage-space befitting his significant legacy to our State, nation and the world. As well as create opportunities for researchers to study the collection. The Fonseca legacy adds to an already-existing XCHR repertoire of several other Fonsecas purchased decades earlier. Since its inception in 1540, the Society of Jesus has become the foremost global creator, curator, broker and patron of cultures, literature, arts and visual arts. The Jesuits had a clear notion about the importance of culture and the visual arts for their enterprise.

On learning I was writing a much-awaited book on Angelo da Fonseca, Mrs Ivy da Fonseca has kindly permitted publication of several images of Fonseca’s paintings. A Jesuit colleague, Fr. Josef Übelmesser SJ, who studied theology in Pune, India, in the 1960s, had met the artist at the time and purchased several Fonsecas for the Jesuit Mission Office in Germany. Fr. Übelmesser SJ and Fr. Klaus Väthröder SJ, both German Jesuits, from the Missionsprokur of the Jesuits, Nürnberg, Germany, were kind enough to permit me to photograph for this book several Fonsecas from their archives. Jesuit interest in and patronage to Fonseca during his lifetime and after is an ongoing collaboration.

I was privileged to be a member of the Xavier Centre of Historical Research when hundreds of unsold Fonsecas were donated to the Centre. Some of them are world treasures and would be the cynosure of art collectors. I had the rare opportunity to study them very closely for years. Together with Vivek Menezes, an art critic and writer who introduced me to the Goan art world and became my mentor, we curated a few Angelo da Fonseca exhibitions. Menezes had played a very constructive curatorial role at the institution then under my directorship. However, every effort made then to provide Fonseca a meritorious public space at the Xavier Centre was not successful.

The beneficiaries of Fonseca’s legacy have a duty to reinstate Fonseca. His legacy and message ought to become more than just a matter of seeing and thinking -- it ought to become a way of being and doing. That is what art is all about. A Fonseca gallery would go a long way towards helping us understand his significance to Goa in particular, and to Christianity in India. I am optimistic that Fonseca’s brilliant submissions will soon attract a studious public who will recognise and appreciate such a genial way of being in the world.