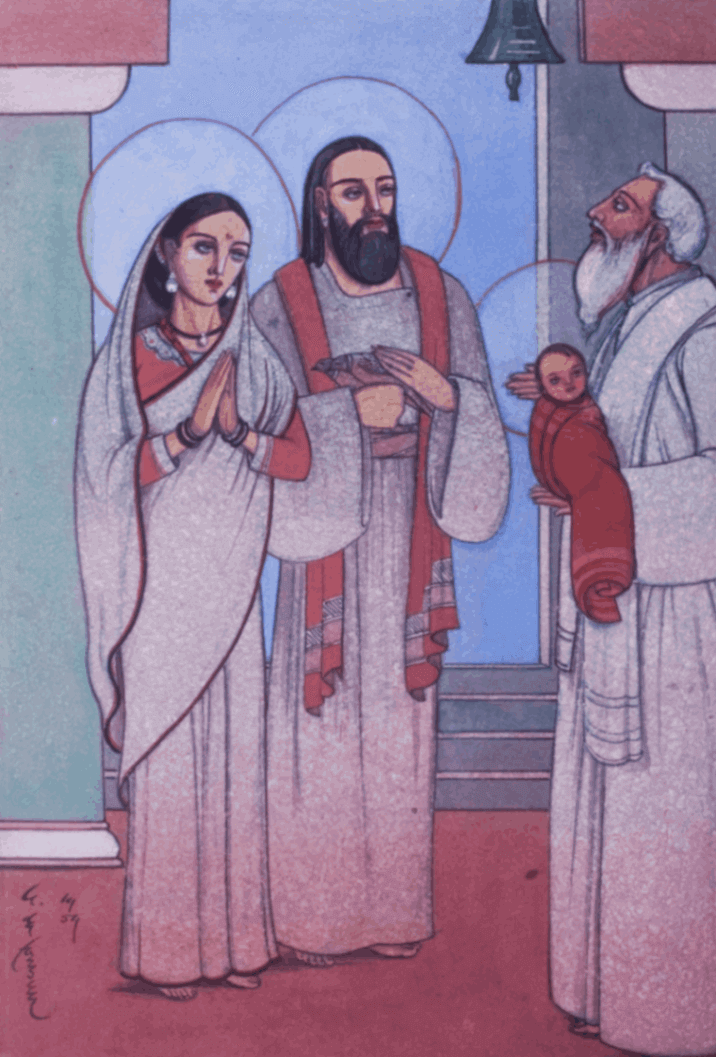 For an artist with a massive body of radical subversive art that re-visualised Christian art themes in India, dozens of national and international exhibitions and awards, Goa born Angelo da Fonseca (1902-1967) is still an enigma to the world. His invaluable contribution to the art world and society is still relatively unknown, and begs the question: What is the process that drives the truly great, those ahead of their times, the genius forward thinkers, and the reformers in our midst into oblivion? Fortunately, in the last twenty years, a few art critics who have examined his masterpieces in the original have retrieved and acclaimed Fonseca as a modernist painter that stands among the foremost in India. This master artistically translated the Christian narrative, particularly Christ’s life and message, in Indian idioms to connect Indian Christians to their cultural traditions, world heritage and political duties. Fonseca challenged traditional Christian art assumptions and reinterpreted them for an Indian context. In doing so, he unwittingly but convincingly positioned himself within the vibrant modernist movement in the visual arts. At the beginning of the twentieth century, the Church regarded modernism as a threat to its traditional political privileges and religious thoughts.

His advisors and patrons, all foreign Catholic clergymen working in India, discovered in Fonseca an accomplished artist. They discerned that his art had great potential to Indianise the Church. As a practising Indian believer in the Catholic Church, Fonseca emerged as a pioneer in translating the biblical narrative into a meaningful local pictorial vocabulary. He stormed onto the artistic stage of pre-independent India of the 1930s and 1940s, as the foremost unconventional painter of Christian themes in India. For his unique contribution, he was admired all his lifetime, but like all great artists, never accorded his artistic or monetary due. Revisiting and retrieving the extraordinary genius of Fonseca is a long overdue project.

Architecture and art historian, Paulo Varela Gomes, in a perceptive essay argues that the continuous tagging of Fonseca as a ‘painter of religious themes’ by his admirers, patrons and critics, led art historians in India to ignore him and seal his works off from the modernist narrative and art historiography. It plunged him into obscurity. Fonseca was categorised as one among many others in India and around the world who used art to passionately serve religion. The marginalisation of Fonseca from art history and modernism is caused by the fact that his critics focused more on the subject matter or theme of his works, rather than on their formal elements and social message.

It is not easy for historians and critics to assess twentieth-century Christian art, especially after the post-modern global rejection of Christian themes and art branded as ‘religious’. Ironically, however, paintings with Christian subjects by renowned artists like Vincent van Gogh, Paul Gauguin, Salvador Dali, Marc Chagall, Francis Newton Souza; by classical painters of the high renaissance who served religion through visual art — were never rejected and forgotten from art history by modernism. Fonseca, who almost exclusively painted sacred art, suffered a different fate and seems to have vanished from contemporary art history. Modernism can be blamed for ignoring this Indian genius, but the public inaccessibility of Fonseca’s works is another reason for his obscurity.

Fonseca opted for the neo-Bengal School, a revival of the old famous Indian school of painting or classical movement. The movement encouraged use of delicate lines, fine features, elegantly proportioned figures, not overly expressive faces. Works with these features represented an orderly mind. The original neo-Bengal School before Fonseca’s time, represented high and middle-class lifestyles. When Fonseca selected this cultural movement in his late twenties, he had not yet a clear idea about the subjects he wanted to paint in the future. All through his career, he however held on to the canons of neo-Bengal classical painting, striving to meaningfully communicate the Christian message to Indians in a common language.

Fonseca was by no means the first. Since the middle of the sixteenth century, Mughal court artists working under the active patronage of a Muslim emperor, Akbar, became pioneers of Christian paintings in the oriental style in India. In the early twentieth century, Hindu artists began portraying Christian images in Indian accoutrements and forms. When the Catholic Church was still far from encouraging Indian Christian art, non-Christian patrons and artists had artistically interpreted Christ’s universal and timeless message. Fonseca worked within the framework of Christianity as a practising Catholic, but certainly not within colonial or western perspectives. He profoundly reflected on his religious beliefs and duties as an Indian, before taking his artistic vision to the public. The result was a superb, harmonious and sophisticated way of seeing, not only Christian traditions and practices, but also the world and humanity.

Fonseca strongly felt only a home-grown pictorial Christian art form in India could connect Christians to their history and social duties. His remarkably rich array of ‘brown’ watercolour Christs and Madonnas as well as the use of colour pigmentation made from his native soil, constitute an unspoken critique of imported instruments and elements, when India could just as well offer them. It was his way of practising ‘swadeshi’ to halt western cultural dominance. His works are an invitation to recuperate the best domestic traditions, obfuscated before. It was a critique of superfluous cultural imports that alienated one from local history. He was not only an artistic phenomenon but also a religious, social and political analyst and reformer.

Misunderstood and misrepresented then, and purposefully ignored throughout the intervening decades, the main body of his paintings somehow survived intact via the extraordinary faith, courage and determination of his widow, the indomitable Ivy da Fonseca. Emerging now in the light of the 21st century, it is amply clear these paintings are of immense global significance. What is more, their publication in this meticulously compiled and lovingly produced volume feels nothing short of miraculous. Out of nowhere, in an astonishing twist of fate, it seems that justice will finally be served to Indian art history, more than 50 years after the artist himself departed our world.